Kyoto, which has been ranked as the world’s most popular tourist city for 2 years in a row, attracts many visitors not only from Japan but from all over the world.

Standard places such as Kiyomizu-dera Temple, Kinkaku-ji Temple and Ginkaku-ji Temple, and Arashiyama are lively and fun like sightseeing places, but on the other hand, there’re many places where you can’t go around calmly. 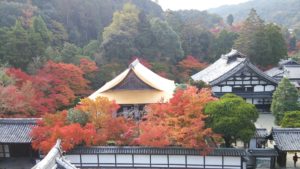 For such people, I’d like to introduce you to the hidden places to enjoy Kyoto slowly and calmly.

Daiho-on-ji is a Shingon Sect temple located in Kamigyo Ward, Kyoto. Its main hall was built in 1227 (The early Kamakura period) and survived the Onin War and many other wars. About 800 years later, the temple remains as it was at the time. 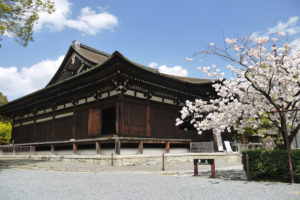 When you enter the main hall, you’ll notice a large pillar, but you can see the scars of swords and spears that soldiers put on the pillar during the Onin War.

It’s said that if you visit Okame-zuka in the precincts, you’ll be blessed with marriage tie, marriage harmony and pregnancy.

Cherry blossoms and green leaves and the main hall↓ 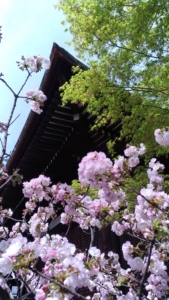 On the west side of the main hall is the Reiho-den where many national treasures and important cultural properties are preserved, including the Jyuudaideshi-zo Statue and the Rokukannon-bosatsu-zo Statue.

There’re not so many tourists, so you can feel the history with your own eyes, and you can face the wonderful Buddha statue at close distance.

It’s on the east side of Kitano-tenmangu Shrine.↓

Daitoku-ji is one of Kyoto’s largest Zen temples, with many of the temple’s buildings designated National Treasures and Important Cultural Properties.

The temple was completely destroyed by fire during the Onin War, but was rebuilt by Ikkyu-san, or Sojun Ikkyu , with donations from powerful feudal lords and wealthy merchants. In front of the Hojo is the Karamon (National Treasures) which is said to have been relocated from Jurakudai. Jurakudai is a gorgeous government office and residence built by Hideyoshi Toyotomi.

It was demolished 8 years after its completion, so there’re many unclear points. One of the remains of Jurakudai remains in Daitoku-ji Temple.

Daitoku-ji is also known as the temple where Hideyoshi held Nobunaga Oda’s funeral, which prompted Sengoku warlords who wanted to join Hideyoshi to build sub-temples one after another.

There’re more than 20 sub-temples, but many of them are not usually visited for fear of secularization. However, the four sub-temples of Daisen-in, Ryogen-in, Zuiho-in and Koto-in are always open to the public. 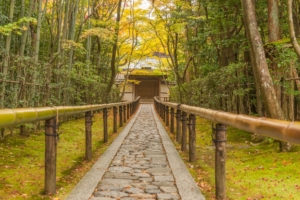 Koto-in is a particularly popular spot. The study is a relocated residence of Sen-no-Rikyu and it is worth seeing.

In Daitoku-ji, you can enjoy luxury in the quiet and relaxing precincts. You can enjoy Kyoto which is different from places crowded with tourists such as Higashiyama and Arashiyama.

It’s located in the northwest of the urban area of Kyoto, and if you go west, there is Kinkaku-ji Temple.↓

Shosei-en Garden is a detached precinct of Higashi-hongan-ji Temple, with a garden called Chisen-kaiyushiki (Stroll garden with a central pond).

It’s a little far from Higashi-hongan-ji, but it takes about 5 minutes on foot. 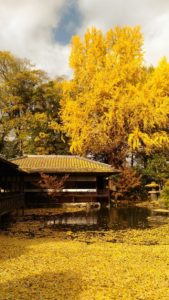 A pond tinged with gold with ginkgo leaves

In the mid-1600s, the area was donated by the Tokugawa family and made by Jozan Ishikawa in opposition to the Nishi-hongan-ji Temple garden. Jozan is also involved in the garden of Shisen-do Temple which is famous for its fall foliage.

He was originally a samurai serving the Tokugawa family and an excellent man of both literary and military arts. 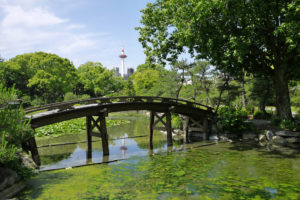 You can see Kyoto Tower from the garden

Although it’s located in the city of Kyoto where you can see the Kyoto Tower from the garden, you can enjoy the garden very quietly. You can enjoy the beautiful garden throughout the year, not only during the fall foliage season.

It’s right on the east side of Higashi-hongan-ji Temple.↓

Myoshin-ji, famous for its Unryu-zu and Akechi-buro (Bath)  is Japan’s largest Zen temple. 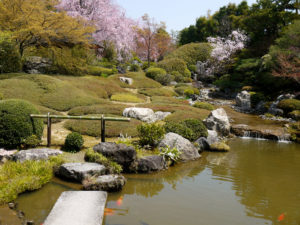 The precincts are vast and have 46 sub-temples and many important cultural properties. We’re surprised that Ryoan-ji Temple, which is famous as a world cultural heritage, is also one of the sub-temples outside the border of Myoshin-ji Temple.

One of the sub-temples, Taizo-in Temple is an ancient temple where even the great swordsman Musashi Miyamoto trained himself. It has a magnificent garden called “Yoko-en". Beautiful weeping cherry trees bloom in spring. 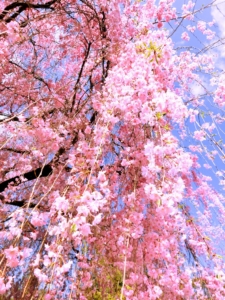 How about finding your favorite garden and having a luxurious time? It’s a very famous temple, but it’s far from the urban area, so it’s not a tourist spot. I especially recommend the quiet morning.

It’s near Ryoan-ji and Ninna-ji Temple.↓

Shisen-do was originally a mountain villa where Jozan Ishiyama spent his later years and is a Buddhist temple famous for its beautiful Japanese gardens. Jozan himself designed the garden of course. 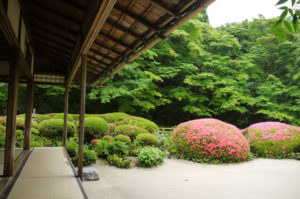 The temple precincts are located along the slope of the mountain and are characterized by buildings and gardens that make use of the natural terrain. Every time I go there many times, I feel like I get to know how good it is.

The Shishiodoshi in the garden is said to have been made for the first time in Japan. 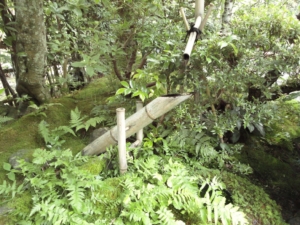 Have you ever heard of shishiodoshi?

The temple is not so big, so it may be crowded in the afternoon on Saturday and Sunday. However, since it is far from the city, there’re relatively few tourists, and you can enjoy a quiet view of the garden.

The temple is listed in various guidebooks as a famous spot for fall foliage, so you need to be prepared for it during the season. But I still think it’s worth going to see it.

The nearest station is Ichijoji Station on the Eizan Main Line.↓

Shoren-in-Monzeki is an imperial Monzeki temple located in a quiet area adjacent to Chion-in Temple in Higashiyama. 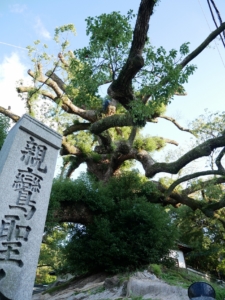 The temple precincts have a historical Buddha hall, garden and bamboo grove, and there’re few tourists so you can take your time to see them. 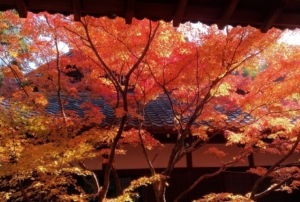 In spring and autumn every year, there’s a special night viewing where you can experience a fantastic world surrounded by blue lights. 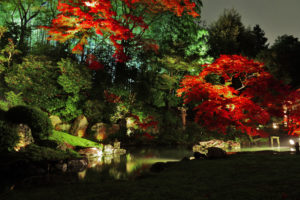 The illumination is also beautiful.

A big camphor tree 800 years old welcomes you in front of the gate. The national treasure Blue Acala is a must-see.

It’s next to Chion-in Temple.↓

Yogen-in was founded by Hideyoshi Toyotomi’s concubine, Yodo-dono, as a memorial service for her father, Nagamasa Azai. Later it was burned down by lightning, but it was rebuilt by his third daughter, Ogo. After that, the mortuary tablets of successive Tokugawa Shogun were enshrined. 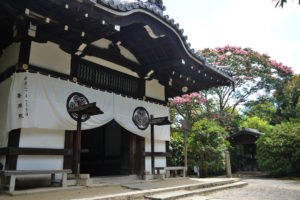 If you look closely at the Ihai (mortuary tablet) of Ogo and Hidetada, there are three crests: Kiku (Chrysanthemum), Aoi (Hollyhock) and Kiri (Paulownia wood).

If you don’t know much about the history, you can enjoy more if you check the relationship between Nobunaga Oda and Nagamasa Azai and the three Azai sisters. 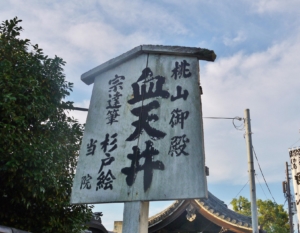 It’s also famous as blood ceiling and it is said that this board is coated with the blood of the warlords who committed suicide at the fall of Fushimi-jyo Castle. It also has realistic blood traces, so it’s a bit creepy.

Yogen-in is next to Sanjusangen-do Temple, so I recommend you to go together.

It’s next to Sanjusangen-do Temple near Shichijo Station of Keihan Main Line.↓

Sennyu-ji has a deep relationship with the Imperial Family and is also called Mitera. After passing through the temple gate, you will see the Yokihi-kannon-do on your left. Tankai who went to Tang was asked to evacuate the statue, so he brought it back to Japan and enshrined it in Sennyu-ji Temple.

As it is the Kannon statue of the most beautiful woman in the world, it is said to have blessed blessings for women such as matchmaking, prayer for beautiful woman and easy delivery. 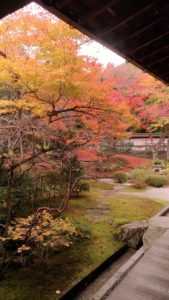 The precincts are large, especially for those interested in temple architecture and cultural properties. The fall foliage in the garden are beautiful, so I recommend you to go with the nearby Imakumano-kannon-ji Temple.

It’s close to Tofuku-ji Temple which is famous for autumn leaves.↓

Gio-ji is known for its spectacular Moss Garden in Kyoto.

From spring to summer, the garden becomes dark green with moss and green leaves, and the mysterious space spreads out. 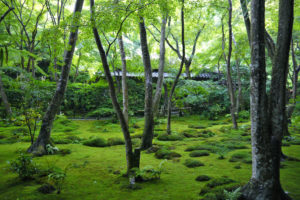 In autumn, the colorful fall foliage are beautiful and accentuate the moss color tone. The falling colored leaves in late autumn are also beautiful, and the scenery looks like a picture no matter where it is cut.

Because it’s a little far from the station, there’re few tourists except in the season of fall foliage, so you can take your time to see it. 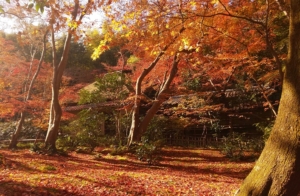 The temple precincts are small and the area where you can take a walk is not so large, but the quiet and quiet place makes you feel relaxed.

If you go to Daikaku-ji Temple, the common admission ticket is a good deal.

Daikaku-ji is a Buddhist temple belonging to the Daikaku-ji School of the Tendai Sect in Saga, Ukyo Ward that was formerly Emperor Saga’s villa, called Saga-in which was converted into a temple.

It’s a feature that each building is connected by a corridor so that the emperor doesn’t go down to the ground. The view from the Godai-do by Osawa-no-ike Pond is fantastic. 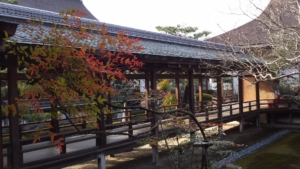 Osawa-no-ike Pond is the oldest man-made pond in existence in Japan, with cherry trees planted around a distance of about 1 km, and in spring you can enjoy spectacular views colored in pale pink. 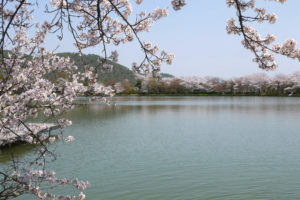 It’s so large that you cannot believe it is an artificial pond.

The Reihokan houses the Godai-myo-o-zo Statue (Important Cultural Properties) and you can drop by to see it. Myo-o is a Buddhist statue that severely scolds those who commit evil acts and leads them to a correct path. He stares at me with a strong sense of intimidation so as not to do bad things. The Reihokan is only open for viewing during the spring and autumn treasure exhibitions. 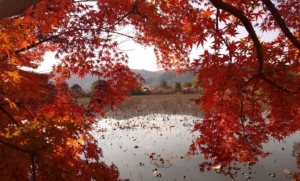 Daikaku-ji is near Uzumasa-Eigamura (Thema park), so the grounds are often used for filming period movies and TV programs. The Precinct are large and a little far from Arashiyama, so there are less tourists. You can relax in the quiet temple surrounded by greenery.

Because there’s a big pond, the place is easy to find.↓ 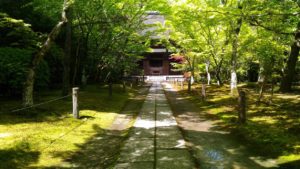 Ikkyu-san was a priest in the Muromachi period (1336-1573), and the animation featuring Ikkyu-san is famous in Japan. He spent 25 years in this temple until he died at the age of 88.

In the anime series, Ikkyu-san was honest and mischievous, but in reality, he broke Buddhist precepts and attempted suicide twice, and his character was quite wild. However, he stuck to his belief and was loved by common people because of his humane character. 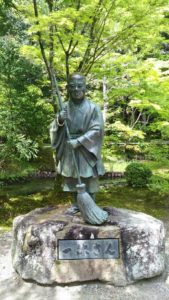 The garden at Shuon-an was created by Jozan Ishiyama and has a Jozan-like look. The temple precincts are beautifully cared for in every corner, and you can feel at ease whenever you visit, with the green leaves in summer and the red leaves in autumn.

All the temples in Kyoto City are crowded, but there are few tourists and you can see them calmly.

It’s in Kyotanabe city to the south of Uji city.↓

The Tai-an at Myoki-an Temple is said to be the only existing tea house built by Sen-no-Rikyu. 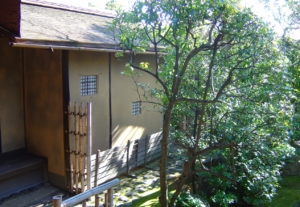 Sen-no-Rikyu hosted many tea ceremonies under Hideyoshi, such as the Kitano large tea festival and created several quaint tea rooms. He served as a close aide to Hideyoshi for a while, but as Rikyu’s influence grew, his relationship with Hideyoshi worsened and he was ordered to commit seppuku at last. 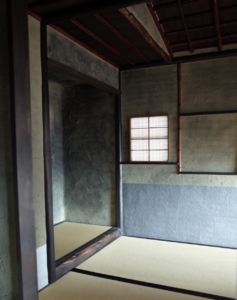 The Tai-an is about 2 tatami mats in size, but it’s designed to make a small space look larger. It’s very impressive to imagine that Hideyoshi and Rikyu had a tea ceremony together in this teahouse.

To visit Myoki-an, you need to make a reservation by a double postcard about 1 month in advance. Please be aware that photography is prohibited inside.

Around the time of the Battle of Yamazaki.↓