In rural Japan, the custom of scattering Mochi (rice cakes) from the roofs of houses under construction still remains.

It’s said that this is to show gratitude to the gods of the earth and to stop future disasters. 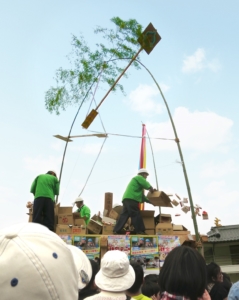 Red and white Mochi are commonly used, and they are put in a plastic bag so that they don’t get dirty. Mochi is dried and hardened. 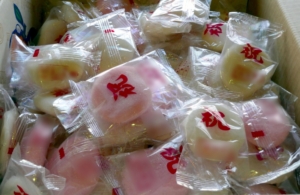 First, throw Mochi in order from the top of the roof to north, south, east and west to show gratitude to God.

Once that’s done, Mochimaki really starts. Many people who are looking for Mochi gather around the house. Family members drop Mochi one after another for people. Other than Mochi, they sometimes throw sweets, money, towels and so on.

Wakayama Prefecture in the Kansai region is famous as a place where Mochimaki is often held.

One of the famous Mochimaki spots is Kimiidera. It’s an annual event to pray for good health every March. 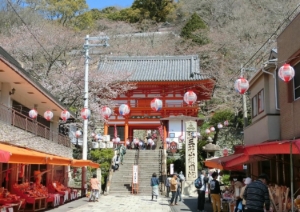 The event kicks off with a giant Mochi that’s nearly a meter across. Throw it after the monk gives a loud warning. Many worshipers reach out for good luck.

After that, the normal size of the Mochi falls like rain. The number is said to be about 5000. From the middle, sweets, towels and bags are scattered from one to another.

People who catch them directly or pick them up…it’s like enjoying sports!

Another famous place is Minatofukiage Shrine. Mochimaki here is a traditional event that has been held since the Edo period (1603-1868). 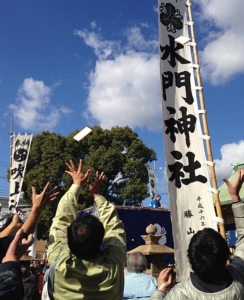 It’s held on November 23 every year and about 500 people participate to compete for the Mochi that is scattered. The total weight of the Mochi is about 200 kg. 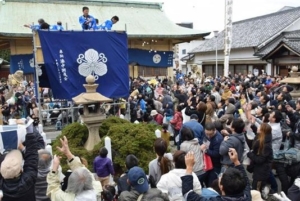 And the highlight is that the Mochi, which is the size of a single tatami mat, is dropped. (Size of Tatami mats: 910mm×1820mm)

The sight of people competing with the dropped extra large Mochi seems to be the climax of the festival!

Tips for getting a lot of Mochi

Then, I’ll tell you the tips to get a lot of Mochi.

The minimum necessary thing is a plastic bag. It would be better to wear work gloves with slip resistance.

The first secret is to get to the front of the stage first. If possible, the center where people gather is desirable.

Because the people who throw Mochi try to throw it where people gather most. Inevitably, your chances of getting Mochi will increase. 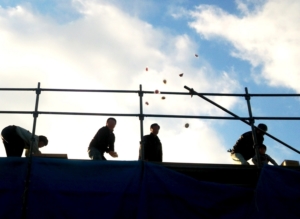 And the second secret is not to look at the flying Mochi, but to pick them up from the ground. When several Mochi are thrown at once, people look up and try to catch them in the air, but half of them fall to the ground without being caught.

You predict that, and you squat down faster than anyone else and quickly pick up the Mochi that falls in front of you. 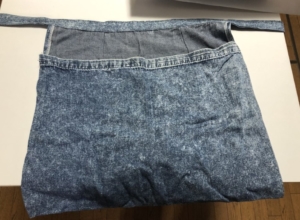 Also, do you know there’s a Mochimaki apron? With this, you can use both hands, which gives you more chances to get a Mochi. A must-have item for those who love Mochimaki.

How was it? Wakayama is so popular that it’s called a holy place of Mochimaki.

Mochimaki is an event that is more exciting than expected. Please try it if you have a chance!

Professionals who make Mochi at super high speed in Nara

The Quick Work of Making Rice Cakes in Nara 🍚

Mochi is a sticky traditional Japanese i ...

The Akashi Kaikyo Bridge, which spans be ...

Railroad Runs Through in the Restaurant – Aioi Shokudo 🚃

KAOSU-NO-MA – Welcome to the Evil World

Kyoto Higashiyama is an area where histo ...

We want to casually enjoy a day trip to ...