The scale and shape are perfect for ancient heritage such as Nintoku-tenno-ryo Kofun, the world’s largest tomb in terms of area. 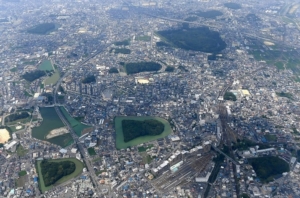 However, it’s also true that it’s difficult to grasp the whole view from the ground because it’s too big.

When you look around, I recommend you to see aerial photos or Google Maps at the same time. You can surely feel the breath of people who lived in ancient times with the scale of kofun.

Kofun is a tomb built to bury ancient nobles and powerful people. Those built from the middle of the 3rd century to the 7th century are called kofun.

Unlike mass graves, they are historically significant because they were made to bury specific people. 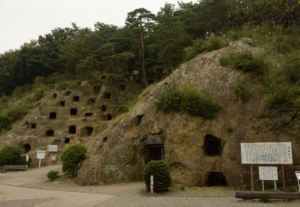 This is also kofun. (Yoshimi Hyakketsu)

Kofun’s burial method changes from time to time. It represents a change in social and political structure, and research on ancient tombs is still ongoing.

It’s a round shape combined with a square shape and is known as a representative shape in Japan.

Built in the 5th century, it’s widely distributed in Japan, and there’re about 4,800 keyhole-shaped kofuns. It’s said that the great king of Yamato government who was in power at that time liked to adopt it.

Circular-type kofun is, as its name suggests, a kofun made by piling up earth in a circle. Most of them are medium and small size, and 90% of kofun in Japan are said to be circular-type.

A kofun in the shape of a square or rectangle, and many were built throughout the kofun period (250-538). As its shape is common, it exists in various places in the world.

One of the World’s 3 Great Tombs

Nintoku-tenno-ryo Kofun (Daisen Kofun) is Japan’s largest Keyhole-shaped kofun built around the middle of the 5th century. It’s one of the 3 great tombs in the world along with Khufu Pyramid and Qin Shi Huangdi Tomb. 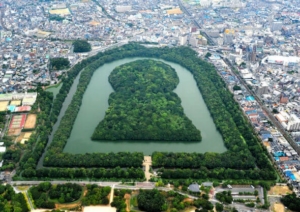 It’s about 486 meters long. The inside is not open to the public, but the aura floats quietly from the tomb mound surrounded by deep green. There’s also a tour around kofun (Approximately 3 km). You can feel the size when you actually walk.

Kofun is so big that when you get close you look like just a forest. In that case, I recommend you to see the full view from the observation room on the 21st floor of Sakai City Hall.

The place of worship of Nintoku-tenno-ryo Kofun has a solemn atmosphere. A small mountain covered with trees in the back is kofun itself. 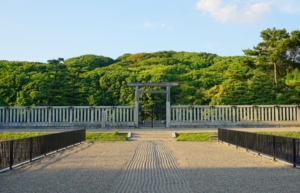 The place of worship

The south side of Nintoku-tenno-ryo Kofun is Daisen Park. There’s a lawn plaza, a library, a museum, a Japanese garden, etc., and it’s a recreation spot for citizens. If you have time, please visit Sakai City Museum which has exhibitions related to ancient tombs and a tour to simulate the Mozu Kofunguns.

Richu-Tenno-Ryo Kofun is the 3rd largest kofun in Japan with a total length of about 365 meters. It seems to have been built earlier than Nintoku-tenno-ryo Kofun in the first half of the 5th century, surrounded by a double moat. The buried person is considered to be Emperor Richu. 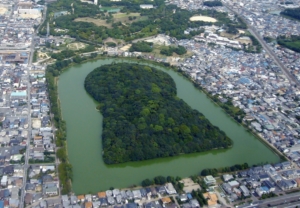 The view spot is the sidewalk on the north side of kofun. You can experience the beautiful, rounded silhouette of the trees up close. Despite being the first giant kofun in Mozu Kofungs, it’s undeformed. 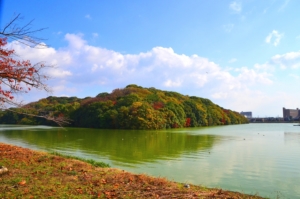 From the viewing spot, you can see the sunset over the tomb mound toward Osaka Bay. 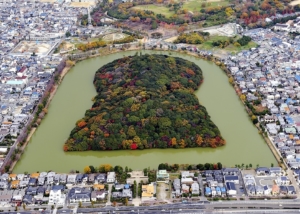 A bakery called “Loire" on the east side of Daisen Park sells Keyhole-shaped bread. The dough of the bread is soft and there’s a lot of tsubu-an (sweet red bean paste) inside. 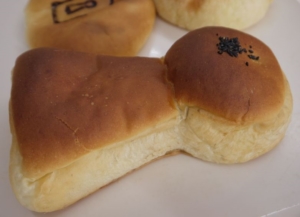 There’re 5～6 other kinds of bread with kofun as a motif. These kofun Bread is popular, so it may be sold out in the evening. I recommend you to go early.

Speaking of the stage in Kyoto, Kiyomizu ...