There’s a shopping street with many Yokai monsters in Kyoto.

In the past, paranormal phenomena and bizarre events were attributed to demon in Japan, and this has been passed down as a story of Yokai and people have feared it. Since then, Yokai have come to be recognized as ominous and fearful images, such as demons with fearful features, kappa, Hitotsume-kozo (one-eyed goblins), and rokurokubi (round necks).

There’s a shopping street called Daishogun shopping street” on Ichijo-dori in Kyoto. This street is called Taishogun-Hachi-jinja Shrine which was built to ward off evil at the time of construction of Heian-kyo. This is called Yokai Street.

Then, what kind of place is Yokai Street?

When you enter the street, you’ll see handmade monsters in front of the shop! There’re shops where Yokai that everyone knows in Japan such as Kappa, Hitotsume-kozo and Rokurokubi welcome you.

Handmade Yokai are remade from Yokai that appear in Hyakki-yagyo (a flock of demons and specters that roam in the middle of the night appearing in Japanese tales) according to the features of the shop, and it’s said that they were made by ordinary people such as students of art university and housewives.

There’re many shops that sell goods related to Yokai, and rare Yokai goods that are rarely available elsewhere are very popular among young women and foreigners.

Inoue sells a product called Yokai Ramen. The soup darkened with squid ink and the noodles dyed purple with gardenia seeds look so brave to eat. But let’s eat at “courage to jump down from Kiyomizu stage”. You’ll be able to taste the light taste.

Other than that, there’s a shop which sells a product called Yokai Croquette, and it’s a very delicious food with Matcha potatoes in a black coating with charcoal.

The food sold in Yokai Street looks grotesque, but when you eat it, it’s very delicious and healthy.

Once a year, Yokai Street holds a masquerade event called Ichijō Hyakki-yagyo. Many people dress up in costumes and enjoy the monster parade.

In the past, the Daishogun shopping street itself was in decline, and it was not so lively that a real Yokai might appear. Yokai Street started when the shopping street got better as much as possible, but now it has become so exciting that tens of thousands of tourists visit it during events. 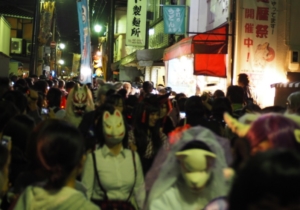 If you go to Kyoto, why don’t you do Hyakki-yagyo with unique Yokai in the shopping street?

In Kyoto, you can see a landscape of tra ...

The Railroad Runs Through the Restaurant – Aioi Shokudo in Kyoto