Osaka Expo ’70 Commemorative Park is a verdant park that was built on the site of Asia’s first World’s Fair in 1970.

The Tower of the Sun, which was built as part of the themed museum of the time, is the work of the late artist Taro Okamoto.

The internal disclosure started in March 2018 for the first time in 48 years.

What is inside the Tower of the Sun? I will introduce it right away.

What’s The Tower of the Sun?

The Tower of the Sun is a symbol of the Osaka Expo and is the largest work by the late Taro Okamoto. 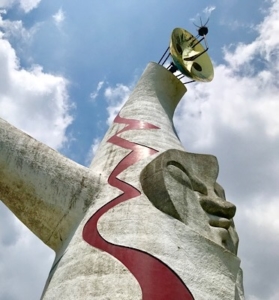 It was built as part of the themed museum of the Osaka Expo and was scheduled to be removed after the end of the World’s Fair, but it was left behind due to opposition from the public. However, because the building was built on the premise of removal, we could not enter inside for safety reasons.

In recent years, after the earthquake resistance and reconstruction work in order to revive the inside tour, the inside exhibition was resumed in March 2018.

Powerful The sun at the bottom

Reservation is required for the inside tour. (The details are written at the end.)

You’ll be guided by the staff inside and explained at the highlights. You’ll depart at the reservation time.

*Currently, you can take pictures in some areas. Please check the website for details.

If you walk down the corridor, you’ll find a wide space on the side. There’s a corona (the outer atmosphere visible around the sun) with a width of about 11 meters, and there’s a The sun at the bottom with a diameter of about 3 meters in the center. 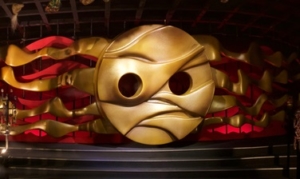 Okamoto’s words, art is magic fit perfectly. If you go further, there is a large space.

Surprised by Tree of life

It’s like a branching tree that grows up. This is a symbolic work inside the Tower of the Sun called Tree of life. 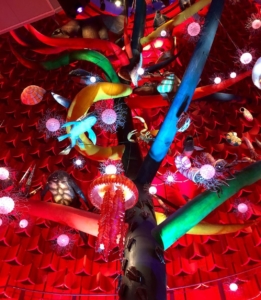 Tree of life is decorated with works of various creatures.

At the base of the tree are protists such as amoebas. Okamoto said, “The unicellular organism is wonderful.".

From there upwards, you see trilobites, fish, dinosaurs, and humans. It represents the evolution of life.

You climb the stairs around the tree while watching the evolution process. It’s like we’re evolving together.

In the middle of the stairs, it was the time when creatures came up from the sea to the land.

If you look up overhead, you can see how organisms have evolved from amphibians to reptiles, and at the same time they have grown in size. 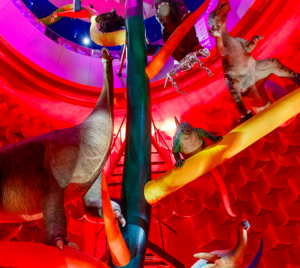 When the dinosaur era is over, we can see mammoths and gorillas. And finally, on the top floor, we can see the human race.

If you look at the arms of the Tower of the Sun from the inside, you can see the sturdy iron framework.

At the time of the Osaka Expo, escalators were installed and people could go out from the tip of their arms to the big roof outside.

The tour takes about 30 minutes. After the inside tour, let’s stop at the museum shop where Okamoto’s goods are lined up. The museum shop is on the first basement floor where you enter.

You need a reservation.

You need to make a reservation on the official website for the inside tour.

Reservations start 4 months before the day you want to visit, and it’s on a first-come-first-served basis.There are many people who want to visit, so it is difficult to make a reservation right before.

Let’s make a reservation as early as possible when the scheduled date is decided.

Also, you need to use stairs inside, so I recommend you to wear comfortable shoes.