Aragijima, located in Aridagawa Town, Wakayama Prefecture, looks like an island despite being connected by land, with 54 large and small rice fields spread like a fan. 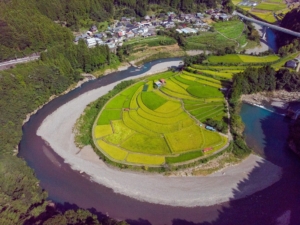 The unique landscape is also regarded as an important cultural landscape in Japan and has become a symbol of Aridagawa Town. 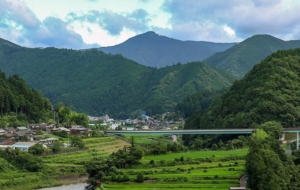 There’s an observation deck overlooking the whole area, and the patchwork landscape, which shows various expressions depending on the season, is also a great spot for taking photos.

How to get to Aragijima

Aragijima is deep in the mountains and there’re no trains nearby, so it’s only by car or taxi.

Stop your car at the roadside station “Aragi no Sato" and walk about 700 meters to the observation deck. 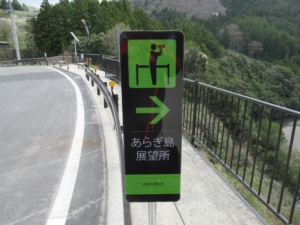 The air is also clear, so if you take a walk, you will get there soon. There’s a guide board to the observation deck on the way, so go in the direction of the arrow.

View from the observation deck

The rice paddies were developed in the early Edo period (1603-1868) by Satayu Kasamatsu, a local village headman, at his own expense to help the villagers. There’re 54 large and small rice paddies, which are currently cultivated by 6 farmers. 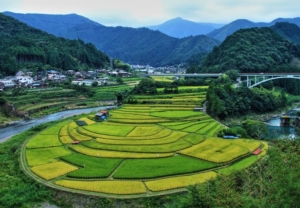 It’s a terraced rice field where Arita River, which originates in Mt. Koyasan, meanders like a hairpin curve. The scenery is unique and looks like a cow’s tongue. 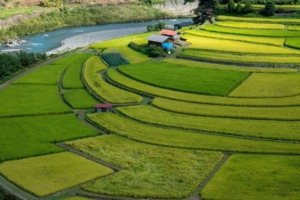 If I take a look with the telephoto lens of the camera, each terraced rice field is separated by a path. I think it depends on the kind of rice plants, but the difference in the intensity of green is a factor in the beauty of terraced rice field. 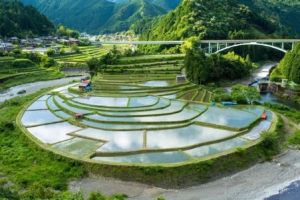 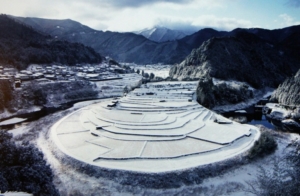 Aragijima’s big appeal is that it shows a different look throughout the year.

Aragijima holds the Candle Illumination on September 6 every year.

In the ignition ceremony, a wire of about 150 meters is extended from the observation deck on the opposite bank of the Arita River to the terraced rice fields, and the pulley sends a fire and ignites it. 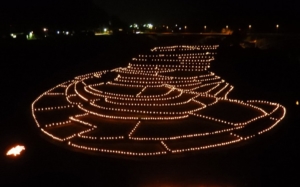 The observation deck on the day of the event is very crowded with tourists and photographers, so please visit there by 17:30 at the latest to secure a place to visit. Also, there’re many mosquitoes around the observatory, so insect repellent spray is a necessity.

LED illumination is also held as a winter event. 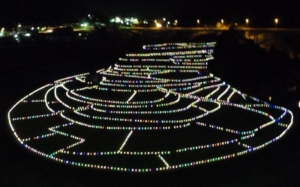 It’s held from early December to early February of the following year. About 3000 LEDs installed on Aragijima are lit after sunset, creating a fantastic view of winter Aragijima. Fireworks will be launched on the last day.

Though a bit far from Aragijima, the same Aridagawa Town’s “Washigamine Cosmos Park" is a cosmos spot with a 360 degree panorama.

When you come to Aragijima in autumn, why don’t you visit here? 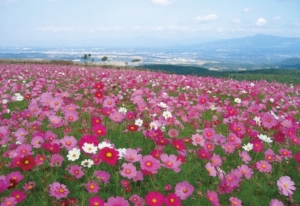 Aragijima is a recommended viewing spot where you can enjoy not only the daytime view but also the night view on 365 days. 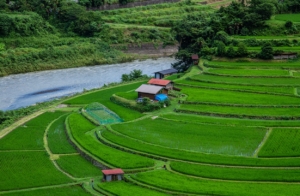